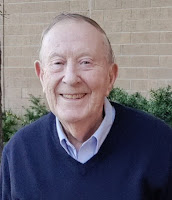 On Wednesday, September 15th, Dr. Andrew Stenhouse  transitioned into his heavenly home. He was my best friend, a member of the board for Doulos Missions International, the ministry I founded, in which I currently serve, and he had served for several years as the President of the Board.
I would like to share with you some of the interesting things that led up to his homegoing.
September 11, 2021

On Saturday September 11th, I had a discussion with my family at the dinner table, in which I mentioned that it may just be best for Andrew to go home be with the Lord at this time, because of the present circumstances in our world. I think I mentioned to them, “Blessed are the dead who die in the Lord from now on.” This comes from the passage in Revelation that says:

"Then I heard a voice from heaven say, 'Write this: Blessed are the dead who die in the Lord from now on.'"

We knew that he was ill, but did not know for sure that this would be the time when the Lord would take him home.

The passage of Scripture that my daughters read the following morning of Sunday, September 12th seemed to confirm our discussion the previous night at dinner. It was the following passage from Isaiah that they read:

Although they all read that passage individually and separately during their own quiet time with the Lord, as part of the portion of Scripture they had all agreed in advance to read that week, at least two of them sensed when they read those verses that it confirmed what we had been discussing the previous night at dinner about the Lord taking Andrew home to be with Him.

Andrew's daughter called me at 8:33 PM and let me speak very briefly to Andrew, who was in his hospital bed having a “cognitive moment”. I told him that we are believing God for a miraculous healing, if it is the Lord’s will to do so, but that this may be the time when he must soon go to be with the Lord. After she took the phone back, she said that he said, “Thank you.” I responded “That’s great.” And she told him what I said.

She then told me that she had been seeing golden specks like glitter appearing on his face that would come, and then at other times they would seem to fade.  But they would come and go. I said, “It’s supernatural. It's something heavenly.” And she agreed. It was truly the glory of God appearing upon him in a visible way. The Scripture describes what was happening to him, how his unveiled face was reflecting the Lord's glory, as he was being transformed into His image with ever-increasing glory:
"And we all, who with unveiled faces reflect the Lord's glory, are being transformed into His image with ever-increasing glory, which comes from the Lord, who is the Spirit." (2Co 3:18)
A few moments later, I texted her, telling her to read out loud to him 2 Cor 5:1-10 (NIV), and she did so. It says:
“For we know that if the earthly tent we live in is destroyed, we have a building from God, an eternal house in heaven, not built by human hands. Meanwhile we groan, longing to be clothed instead with our heavenly dwelling, because when we are clothed, we will not be found naked. For while we are in this tent, we groan and are burdened, because we do not wish to be unclothed but to be clothed instead with our heavenly dwelling, so that what is mortal may be swallowed up by life. Now the one who has fashioned us for this very purpose is God, who has given us the Spirit as a deposit, guaranteeing what is to come. Therefore we are always confident and know that as long as we are at home in the body we are away from the Lord. For we live by faith, not by sight. We are confident, I say, and would prefer to be away from the body and at home with the Lord. So we make it our goal to please him, whether we are at home in the body or away from it. For we must all appear before the judgment seat of Christ, so that each of us may receive what is due us for the things done while in the body, whether good or bad.” (2Co 5:1-10)
September 15th, 2021- Yom Kippur
Nearly twenty-four hours later, I got a text from his daughter at 7:40 PM EDT that said, “Len, Daddy just transitioned into his heavenly home.” I prayed and committed his spirit into the Father's hands. The Hebrew Day of Atonement known as Yom Kippur had just begun on that very same evening.
Only a few brief moments later, as I was driving in the car with my boys to pick up my daughter at work, we played the above Scripture passage from 2 Cor 5:1-10 on my audio iBible. And as I was imagining what Andrew might have been thinking when his daughter read it to him the night before on his death bed, I felt the presence of the Lord upon me. Praise the Lord! That was further confirmation for me that he was now in glory, and that what that passage assures us will happen when the righteous die had now happened to my dear brother Andrew. He is now in his eternal house in heaven not built by human hands. He is now clothed with his heavenly dwelling. What was mortal has been swallowed up by life. He had a willing heart to please the Father while he was in the body, and now he is away from the body and at home with the Lord, but I'm sure his goal is still to please the Father.
He was probably the most godly person I have ever known. He was a man of prayer who, during his retirement years, spent many hours each day in prayer, a significant part of that time interceding for the needs of others. He had a heart for souls, especially the lost. He would take the Lord's Supper daily. He was also perhaps the most generous person I have ever known, whether it was tipping the help, paying for a conference, giving an offering, or supporting a missionary. He would sometimes prepare to write a check to someone, and the Lord would tell him to add another zero on the end of the number he had in mind, which he would obediently do. He cheerfully gave so much that at the end of his medical career, he lived in a modest home, not in a great big, luxurious mansion. And later when it became necessary for health reasons, he lived humbly in a one-bedroom apartment in senior housing. He did not store up treasures for himself on earth, where moth and rust corrupt, but rather in heaven where neither moth nor rust corrupt. Now he has received his eternal reward that God prepared for him and wears a crown that will never fade away.
Here is the tribute made to him in his home town's local news.
_________________________
Author's note: Our dear brother Andrew transitioned to his heavenly home in glory on September 15th, 2021 at the age of 87. This post, written on October 5, 2021, has been back dated to March 5th, in order for it to appear at the end of the series of posts, where it should be. See the Home page of this blog for more podcasts on the life of Dr. Stenhouse. You may access my complete blog directory at Writing for the Master. Now I'd like to ask a very important question.

Do You Want to Know Him?
If you want to know Jesus personally, you can. It all begins when you repent and believe in Jesus.  Do you know what God's Word, the Bible says?

Please see my explanation of this in my post called "Do You Want to Know Jesus?"

Len Lacroix is the founder of Doulos Missions International.  He was based in Eastern Europe for four years, making disciples, as well as helping leaders to be more effective at making disciples who multiply, developing leaders who multiply, with the ultimate goal of planting churches that multiply. His ministry is now based in the United States with the same goal of helping fulfill the Great Commission. www.dmiworld.org.

Called to Be a Doctor

This is an interview with Dr. Andrew Stenhouse, former president of  Doulos Missions International , as he tells how he heard the audible vo...